Why cost per lead increases (and how to decrease your CPL)

When your ad campaigns are going well and you’ve established a good lead quality, the obvious next step is to look at how you can scale them.

It should be simple, right? You’re already getting profitable leads at a good CPL (cost per lead), so all you need to do is increase your budget, and you’re all set.

This isn’t quite what happens though. Instead, SaaS companies will commonly see CPL increasing, and your acquisition model gets thrown into disarray.

This can be avoidable if you take a more controlled approach to scaling your campaigns.

In this article, we’ll cover:

Need help reducing your cost per lead? Schedule a Free SaaS Scale Session to find out how we can help you optimize your campaigns.

Why is cost per lead important?

When you want to measure the cost-effectiveness of a PPC campaign, you can’t go wrong by paying attention to your CPL.

It tells you how much a lead currently costs, allowing you to make projections and set targets to get more out of your campaigns.

It’s an easy metric to calculate:

The lower the CPL, the better value you’re getting from your campaigns. The quality of the leads needs to be considered too, of course, but CPL is still a powerful indicator when making decisions.

For example, if you see that your CPL is creeping up, it’s clear that your campaign is losing its effectiveness, and needs some attention. If it gets too high it will cost more than the leads are worth, making it an inefficient spend of your marketing budget if conversion is the goal.

This is why SaaS companies are forever trying to lower their CPL, but it’s not quite as simple as they often assume.

CPL increase: there’s no linear relationship between CPL and investment

Most SaaS companies take a very linear and simplistic approach to their CPL.

They set a target CPL, then once they reach that target, they try to simply throw more money into the campaign.

The expectation is that by spending more money, the number of leads will grow in parallel to the increased investment, while the CPL will remain the same. Some companies even expect the CPL to go down when they invest more money. But, in actuality, the CPL is more likely to go up than stay the same, and it certainly won’t go down. 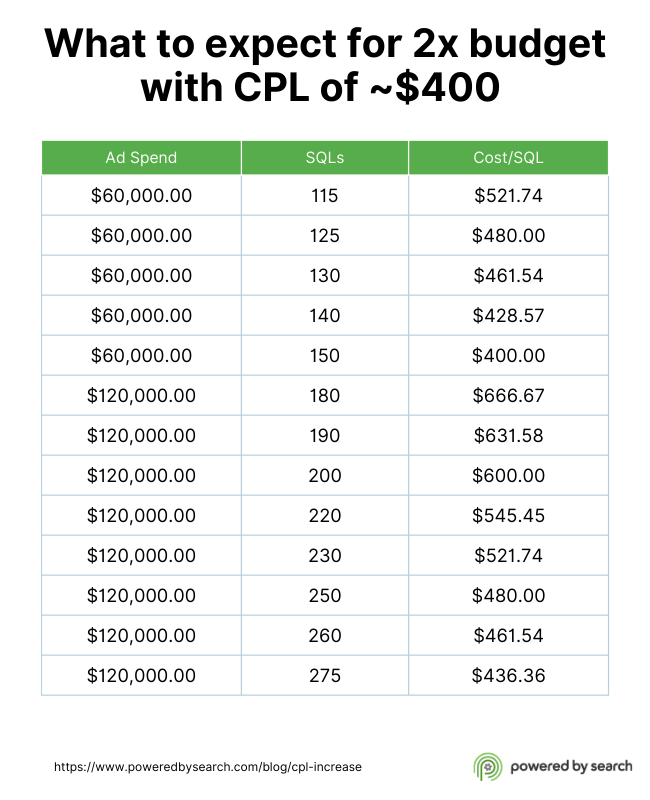 It’s like if you were fishing in a pond: You’ve found the perfect spot, and you’re catching lots of fish, but you want to catch more.

To double your catch, you decide to add a second identical fishing line.

Will you double your catch? Probably not.

There may not be enough fish in that section of the pond, or the rest of the fish that are there may not be drawn to that type of lure. Or even worse, the second line is too much — it scares the fish away, and you end up catching fewer fish than when you started!

And because you’re not here to learn about fly fishing, let’s bring this back to your PPC campaigns.

Related:  How PPC and SEO Work Together: Specific Use Cases and Examples for B2B SaaS

You can’t just do more of the same thing and expect an exponential increase. You need to try new things to see what works for your target audience.

Your acquisition model needs to reflect this approach too, as your projected growth will likely be inaccurate if you’ve based them off unrealistic targets.

Decrease your cost per lead in small steps

If the answer isn’t just pumping more money into the same campaign, what’s the alternative?

We’ve found that this approach steadily decreases the CPL, without requiring massive bursts of financial investment to get there.

To make it easy to follow, we’ve broken this approach down into three steps that will help you bring your CPL down while scaling up your advertising.

1. A small increase to your budget

The first step in this process is quite simple: Make a small increase to your existing budget. You should keep this within the bounds of a 5-15% increase.

You can repeat this process as often as you wish, so there’s no reason to increase rapidly.

The second step can be summarized in just as few words, but there’s a lot more to it:

And make only one change at a time.

If you make multiple changes at once, it becomes impossible to accurately determine which change had which effect on the CPL, and without that data, you can’t make informed decisions later on.

The changes you can make vary from industry to industry, so choose the change you believe will have the greatest impact. Having said that, there’s minimal risk if you make the wrong decision, so don’t spend too much time or energy trying to pick the perfect change.

The most effective way to implement these changes is by setting up A/B tests that allow you to directly compare the new copy with the original copy.

Once you’ve made your change or set up a test, keep an eye on the results and monitor any changes to the CPL to get the most out of the next step.

For this reason, we recommend creating a hypothesis log to track the success (or failure) of these tests – you can use similar columns to the screenshot above (we blurred out the details of our clients’ tests)

Over time, buyers get used to your ad creative. In order to stop them becoming fatigued by your messaging, you should update your ad copy regularly.

Testing different ad copy is not only an affordable way to improve the effectiveness of a campaign, but it’s also one of the most effective.

You can tweak an existing ad or you could write a whole new one—it’s up to you. The important thing is that you set up A/B testing that tracks the effectiveness of the new variants.

If you’re anything like us, you’re constantly doing keyword research, so you always have new keyword combinations you could try.

This is the perfect opportunity to test them out.

By changing the keyword combinations in your strategy, you can make a big impact on the number of leads you acquire.

Going back to our fishing analogy, why fish in the same place every time when you could fish in other lakes, rivers, and oceans?

When you’ve been trying to acquire new customers in a region for a while, you’ll likely notice a decline in efficiency of ad campaigns. This is partly due to prospects you’ve already shown ads to not being in market.

At that point, it makes sense to expand your campaigns to try different regions where there may be buyers in market who have never heard of your solution before.

Taking something that you already have and running it in a new, but similar, location is a great way to take an already successful campaign and give it new life.

For example, if you’ve achieved a low CPL in the U.K., you might want to run the same campaign in Australia, the U.S., etc.

Tip: It’s important to tweak your campaign to use localized vocabulary and vernacular, otherwise you risk alienating the new market.

If you wanted to take a slightly more radical approach, you could create a whole new campaign with the extra budget.

This is a higher risk approach than the others, but it also has the potential to reap the biggest rewards if your new campaign connects with your target audience.

This strategy may require more iterations and tweaks early on, but once you start to get results, you can continue improving it with the changes we’ve already talked about.

This is an iterative process, so it’s important that you regularly review the CPL of your changes to measure the effectiveness. You shouldn’t expect the CPL to drop all of a sudden, but you should watch for what effect your changes have made.

If it looks like the change is driving the CPL up and it doesn’t look like it’s coming back down, you should go back to the test and optimize stage to try something else.

If the CPL has leveled off or even dropped, you know you’re going in the right direction. However, you shouldn’t increase the budget again until you’re close to your target CPL.

Until you get there, continue to test and optimize your campaign until your CPL is where you want it to be.

The only big jumps you should expect to see in your CPL is when you increase the budget, as shown in the diagram below where we’ve plotted ad spend by month versus CPL (cost per SQL) 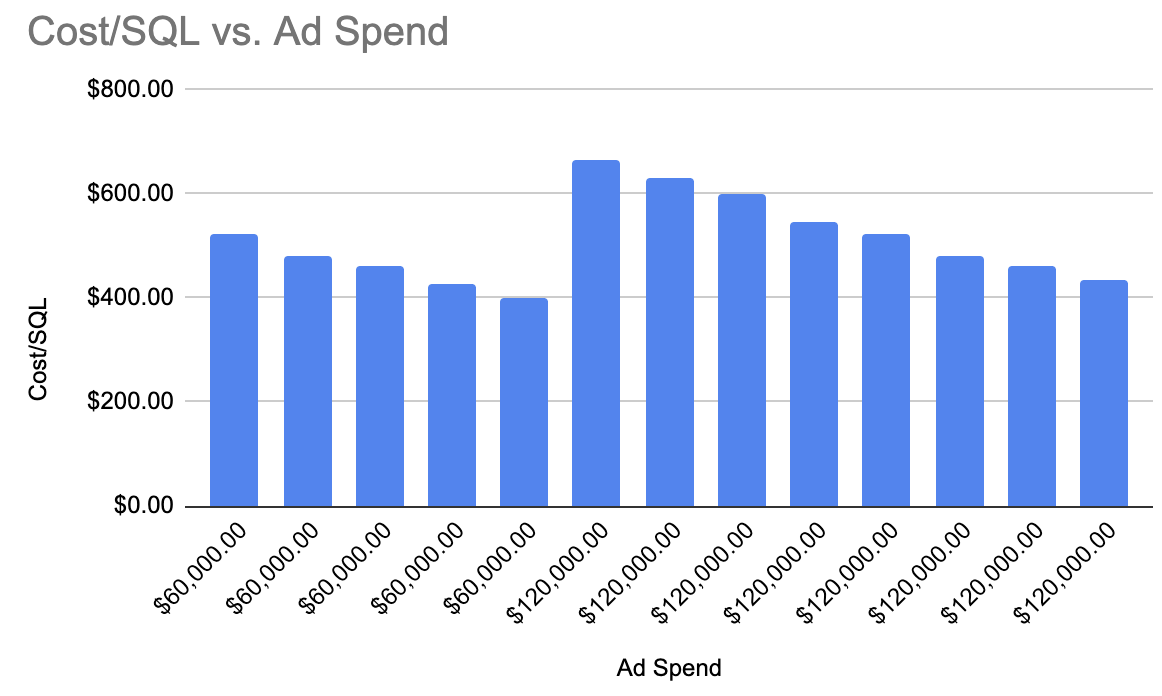 This is to be expected, and through testing and optimizing your approach, you’ll gradually bring that back down and keep it within a manageable range.

It’s worth noting that this is just one approach to improve your PPC campaigns, and it’s wise to optimize your lead quality before focusing on volume.

When you do focus on volume though, your CPL is going to be a vital metric, and simply increasing your budget is not the right way to keep it low.

You can keep your CPL manageable and within an acceptable range—while increasing your number of acquired leads—by following our iterative approach:

It may take time, but it’ll pay off in the long run.

Schedule a Free SaaS Scale Session to see how we can support you in scaling your PPC campaigns and bringing down your CPL.