When building lookalike audiences for Facebook ad campaigns, many SaaS companies rely on limited sources of data. They tend to settle for custom audience data based on all their website’s visitors or other low-purchase intent criteria.

But this practice often results in ad campaigns that are less effective than they could be. That’s because their marketers are using most of their ad budgets to reach an audience of people who are higher in their funnel and further from the purchase stage. This often leads to lower-quality prospects and higher costs per result.

In this article, we’re going to show you how to create better SaaS lookalike audiences based on different levels of purchase intent. You’ll learn about our approach through an examination of CartHook, one of our clients that offers a post-purchase SaaS tool for Shopify businesses. We’ll also share our audience checklist, which helps companies like CartHook make lookalike audiences that drive higher quality results.

Not sure what kind of Facebook lookalike audiences your next PPC ad campaign should target? Consult with us about our service and how we can help. Schedule a free SaaS scale session with us today.

For much of their existence, CartHook’s marketing funnel centered around driving buying decisions through their website. Their main objective was to convince prospects to book demos of their software in the hopes of generating more sales.

But in late 2020, that strategy took a major turn when CartHook reached an agreement to sell their software exclusively within the Shopify Ecosystem. The timing of the pivot put them under a tight timeline to revamp their entire sales process. In a matter of eight weeks, they had to transition prospects from purchasing on their website over to the Shopify store.

To tackle this, they turned to us to build an awareness campaign informing prospects of this change. The objective of this campaign was to get leads to sign up for early access to the Shopify-exclusive version of their app. 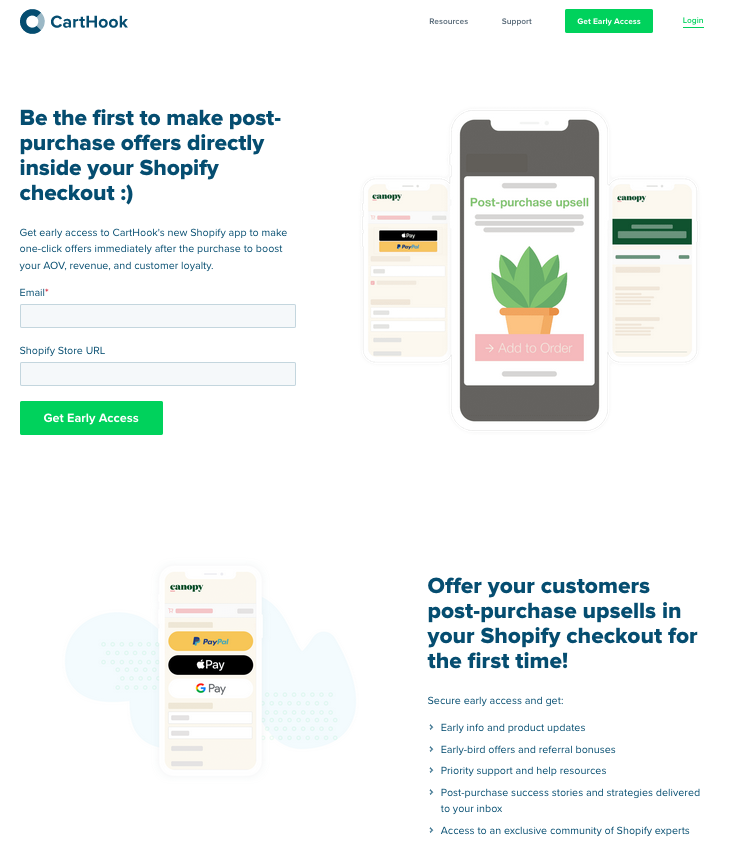 Using Facebook Ads, we had to ensure CartHook prospects were primed and ready to install their software through the Shopify store as soon as they relaunched. To create an effective campaign, we knew that we had to target a wide variety of lookalike audiences based on the most specific sources of data they had at their disposal.

There were two issues that CartHook needed to address in order to successfully launch a new campaign and/or offer:

One of the most common mistakes we see companies make with lookalike modeling is with variance. Such was the case with CartHook, who was running lookalike ads with variance levels exceeding 1%.

Meanwhile, higher-variance levels (such as 2%, 5%, or 10%), are larger audiences, but less similar to the source audiences you provide. These kinds of lookalike audiences expand your reach, but at the expense of placing your ads before quality prospects.

By exceeding 1%, SaaS companies create audience targeting that’s too broad. As a result, they reach Facebook users with fewer attributes and demographics of their original seed audience.

Related:  Beyond Traffic and Engagement: Why Your B2B Saas Marketing Analytics Must Also Include CRM and Product Data

Yes, higher variance lookalike audiences can result in cheaper clicks. But those cheaper clicks still come at the cost of having more unfit prospects coming through your marketing funnel.

Companies like CartHook often start advertising to the 2% to 5% lookalikes because they think they’ve exhausted their 1% audiences. Or they do so because they believe it’s beneficial to reach a massive number of people.

But bigger lookalike audiences need bigger ad budgets to work. Without enough ad spend, they have very little chance of being effective. In our experience, spending less than $100,000 a month on such kinds of lookalike audiences results in campaigns that underperform.

We often find that many SaaS companies don’t revisit lookalike audiences that they’ve targeted before and focus entirely on new audiences. After heavy use, companies tend to leave those audiences behind, believing they’re no longer effective.

But just because a 1% lookalike audience doesn’t work the first time around, doesn’t mean it won’t work if you try again. This is why whenever we start working on a new client campaign, we revisit the well and try it again — especially with 1% lookalike audiences, which almost always perform better.

The Facebook Lookalike Audiences We Built to Help CartHook Relaunch

For CartHook — along with every client we work with — we follow a checklist of different data sources that we use to create audiences. That checklist includes 19 different lookalikes they can target, categorized by the following levels of user intent:

It’s important to note that these audiences aren’t applicable to every company we work with because most companies do not have access to all of these data sets. This is largely due to oversights and errors in their tracking and attribution.

We’ve simply designed this checklist as a strategic source of options we can choose from when we have the data.

In CartHook’s case, we ended up creating seven different ad sets based on one-percent lookalike audiences for their relaunch campaign:

There are a few things we want to expand on about the above lookalike audiences.

The first lookalike audience we noted comprises a unique mix of targeting. Along with the 1% of Facebook users who are most like CartHook’s early access opt-ins, we chose to also include any business page admins who expressed interest in Shopify.

Generally speaking, a page administrator will likely be a business owner or manager. Doing so isn’t bulletproof, but it’s a better signal than simply targeting anyone with interest in Shopify.

Audiences Based on Data Provided by a Partner

CartHook has a partnership with Recart, a SaaS tool for eCommerce companies that engage customers through Facebook Messenger. As part of their partnership, they share pixel data with each other, which allows them to target each other’s lookalike and remarketing audiences.

We don’t normally recommend sharing pixels with other companies. But in CartHook’s case, they had access to Recart’s data so we decided to take advantage of the opportunity. That resulted in lookalike audiences based on Recart’s website traffic and demo registrations.

The last lookalike audience we created was based on people who were logged into the CartHook app.

If you’re a software company that has an online-based tool, that tool is coded differently on your website than a normal WordPress or Javascript page. That’s because code from Google Analytics or Google Tag Manager doesn’t live by default on those sites.

Normally, this isn’t data you can collect through your Facebook advertising pixel. But if you installed your pixel through Tag Manager, you can. That’s what provided us this unique opportunity to target a lookalike audience based on customers that actively use their product.

The Results of CartHook’s Relaunch

In the weeks leading up to CartHook’s Shopify relaunch, we ran ads to all seven of these lookalike audiences (plus two remarketing and interest-based audiences). We started with a daily budget of about $30 to $40 for each one. That range made it possible for Facebook to gather enough data it needed to test each lookalike audiences’ effectiveness.

Over time, we increased spending on the audiences that worked best. Meanwhile, we decreased CartHook’s budget on lookalikes that were the least effective.

Budget optimization is critical to creating a well-run Facebook ads campaign. Many SaaS companies take a set-it-and-forget-it approach and skip this step completely. But doing so is often a big reason why their campaigns underperform and fail to attract new customers.

By running ads to a variety of lookalike audiences based on very narrow data sets, CartHook managed to pay only $24.32 per their desired result of early access sign-ups. That cost per result was 50% lower than our benchmarked metric of $50 (set based on the first 10-14 days of piloting Carthook’s new offer).

The highest performing 1% lookalike audiences turned out to be the following:

All this was possible because we made lookalike audiences that weren’t the usual suspects. By looking beyond the typical sources of data, CartHook enjoyed a successful relaunch while maximizing their advertising spend on Facebook.

Looking to get a better return on your PPC ad budget on social media? Then schedule a free SaaS scale session with us to learn how we can help you drive better leads for your business.